The Ivy at Watertown

Carol thought she was set. She loved her life in Watertown, Connecticut, where she lived with her husband, John, in the house they had shared for the past 48 years. She had a great group of friends at church, which was right down the street, and John took care of the house and the bills.

But then John passed away unexpectedly in 2016.

“He did everything at the house,” says their daughter Lisa, who lives in Winter Garden, Florida, with her husband. “We had to teach her how to put gas in her car, how to take care of the car, how to write checks.”

But Lisa’s biggest concern wasn’t the car. It was keeping her mom safe.

Lisa and her husband offered to move Carol to Florida, but she refused. Lisa understood — “All her friends are in Watertown. The church is there. My dad is buried up there. It’s where she’s lived her entire life.” — but that meant it was time to start on some home renovation projects.

They redid the bathroom so there wasn’t a big tub Carol could trip and fall trying to get in and out of. They diminished trip hazards, removing throw rugs and making sure hallways were well-lit. And Lisa installed security cameras so she could keep an eye on her mom, who was struggling with diabetes, and now depression.

“Unfortunately, she went from having a life partner to having nobody there,” Lisa says. “It was very hard to watch.”

Getting Things in Order

Long-distance caregiving was taking its toll on Lisa, but she didn’t want to push her mom to move. “I wanted her to come to it on her own terms,” she says.

But she wasn’t going to sit back and watch, either. After her dad passed, Lisa hired a financial advisor to help get her parents’ finances in order. They had conversations about creating a power of attorney and whether or not assisted living was something the family could afford.

Carol has a couple of friends who live in Watertown in a single-family residence, “but when I reached out,” Lisa says, “the lady laughed at me: ‘Honey, there is a three-year waiting list. You have to apply when you’re in your 50s!’”

So Lisa talked to a friend, who works as a nurse case manager, about what to look for. She Googled and looked at reviews online. “There was really only one place that looked halfway decent.”

Then Carol’s brother, who visits her every day, was driving around town and saw the sign for The Ivy at Watertown. Lisa called the assisted living and memory care community, and Amie Hanrahan, co-owner of The Ivy, picked up the phone.

“I hear that you’re building a facility in Watertown,” Lisa said. “What can you tell me about it?”

By the end of that initial phone call, Lisa had Hanrahan’s cell phone number and confidence that The Ivy at Watertown was the right place for her mom.

“The other facility I talked to, they were very professional but didn’t seem as warm,” Lisa recalls. “With Amie, it immediately felt like she was extended family.”

Plus, the assisted living community is located in the same town Carol currently lives in, just a few miles from where she has a house, close to the church and everything she knows.

“My friend told me, ‘You’ll know when you know, but it’s your mom’s decision,’” Lisa says.

So it was time to get Carol on board.

Because The Ivy at Watertown was still under construction, the mother-daughter duo drove up to The Ivy at Ellington. For Carol, seeing what life could be like in an assisted living community changed everything.

“Visualizing it was what really helped,” Lisa says. “When I’d show her brochures, she’d be like, ‘Yeah, OK,’ but going to Ellington and being able to walk through Watertown was exciting.”

Carol picked out the floor plan she wants and started working on a packing list. She even told her friends at church that she’d be moving soon.

“Slowly, with education and reassuring her that she’s not going to be alone and it’s going to be secure, we got her to where it’s her decision and she feels good about it,” Lisa says.

Lisa feels good about it, too. “For me, it’s just about the comfort of her being safe. Even though I have cameras in the house and I text her 17 times a day, I’m still worried all the time,” she says.

She’s also excited about the social opportunities community living offers. After John’s passing, Carol struggled with depression. “Instead of her sitting on her couch all day playing on Facebook, I’m hopeful she’ll get out of the funk she’s in and start cooking and socializing with other like-minded people again.”

“I want her to live again,” Lisa continues. “My goal is to call her several times a day and not get her because she’s too busy. I know my dad would want that, too.”

Want more information about The Ivy at Watertown, its family-first philosophy — and the really important stuff, like what the food tastes like and how much it really costs? Request more information from The Ivy team or schedule a tour today!

Topics: About The Ivy at Watertown 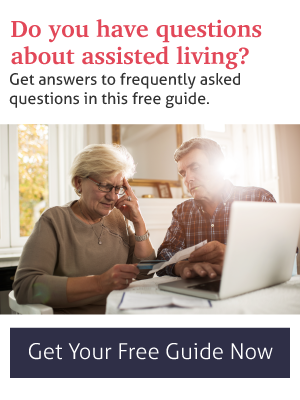