The Arbors at Dracut Blog

In Sickness and  In Health

Peg & Hank Make the Arbors at Dracut Their New Home

Posted by The Arbors

Nearly 60 years ago, Peg and Hank promised to be true to each other in good times and in bad, in sickness and in health, all the days of their lives. So when Hank was diagnosed with cancer and living at home became more and more challenging, they started searching for assisted living communities that accommodated couples.

“We did a respite stay three years ago at another residence, and we liked it very much, but they didn’t have any planned activities and you have to shovel out your own car in the winter time,” Peg says. “They also had a bus, but they didn’t take you many places. It wasn’t very exciting.”

So, while Peg was with Hank at the hospital, their daughter Irene started evaluating different assisted living options for couples. “I really have to say, I left it up to Irene,” Peg says. “She’s a good evaluator. She went to several places and would tell me what they had. But she found faults with every single one.”

Then they found the Arbors at Dracut.

“Next thing you know, I’m packing my toothbrush, and we’re in the Arbors,” Hank says.

Peg remembers meeting Hank like it was yesterday. It was 1959, and Peg was a graduate student in New York. She had plans to go to a party on Long Island with a girlfriend whose friend would drive them out there.

“The doorbell rings, and this good-looking guy comes bounding up the steps — and falls flat on his face,” Peg recalls. “He said, ‘Hi, I’m Hank!’ and that’s how we met.”

Hank remembers how on the ride home, Peg decided to sit in the front seat with Hank instead of in the back with her friend. They married the following June.

Although the two have been happily married for nearly 60 years, they weren’t too excited about moving into a one-bedroom one-bathroom assisted living apartment, but that’s what was available at the time.

Irene kept most of their belongings in her basement at her home in Andover, and Peg and Hank moved into their new apartment in June 2017. But they had their eyes on a two-bed two-bath unit down the hall.

When it became available, the executive director of the Arbors at Dracut, Jonathan Athanas, alerted the couple right away.

A lot of seniors are excited to move into assisted living because they offer three homemade meals. Not Peg.

Peg loves to cook, and she still can in her apartment at the Arbors at Dracut.

“In fact,” she says, “I’m cooking dinner tonight. We’re going to have pasta…”

The couple appreciates how they’re able to sleep in, stay in their pajamas, and make breakfast together before joining the other residents for activities.

“We have a little group that gets together and plays Rummikub every day at 4 p.m.,” Peg says. “We think it sharpens our skills. We also have a book club that meets once every few weeks, and we have some lively discussions — not always about the book, though. A lot of our discussions are about what was going on in the world at the time the book was written.”

When they’re not participating in the community’s activities, Peg and Hank are getting together with their kids and friends they made before they loved into assisted living. They enjoy the food at the Arbors at Dracut — “Last week, Bob [Coffman, dining services director at the Arbors at Dracut] made a baked potato with vegetarian chili, and I thought it was great,” Peg says. — but they also love trying out the restaurants in town.

“There are several good restaurants around here,” Hank says.

Adding to the Family

Hank and Peg were one of the first seniors to move into the Arbors at Dracut — and they aren’t afraid to share their feedback with staff, says Office Manager Michelle Castrio. “A lot of the positive changes here, as far as the community and the residents, Hank and Peg have a part in that,” she says. “Their suggestions help us out.”

The staff at the Arbors at Dracut help out Peg and Hank, too. The maintenance team help shovel off Hank’s car after a fresh blanket of snow, and the receptionist, Maureen, brings any packages that arrive for the couple up to their apartment.

There are things they miss about living on their own, but they’re happy to be in assisted living, too.

“It changes your lifestyle,” Hank says. “But now we have an even larger family.”

If one or both of your parents need assisted living, the Arbors at Dracut can ensure that both of their emotional and social needs are met. Schedule a tour today to see for yourself.

Topics: About The Arbors 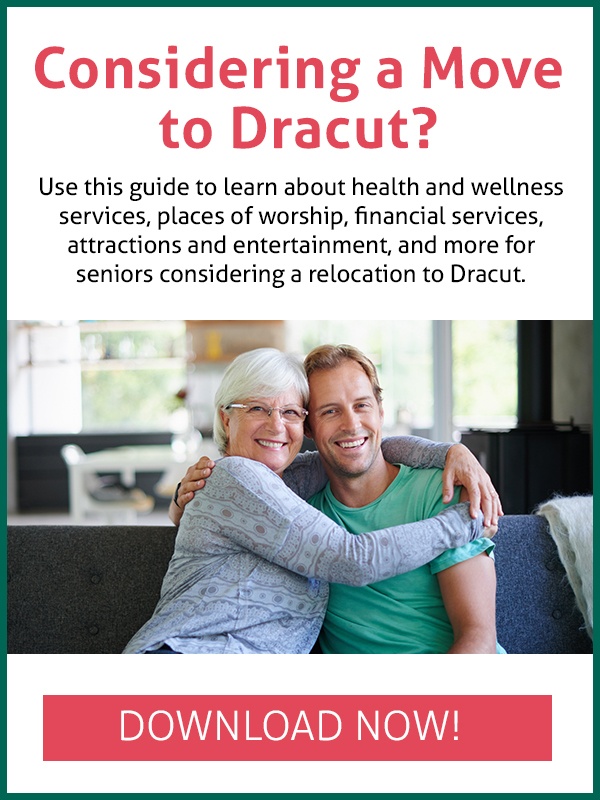